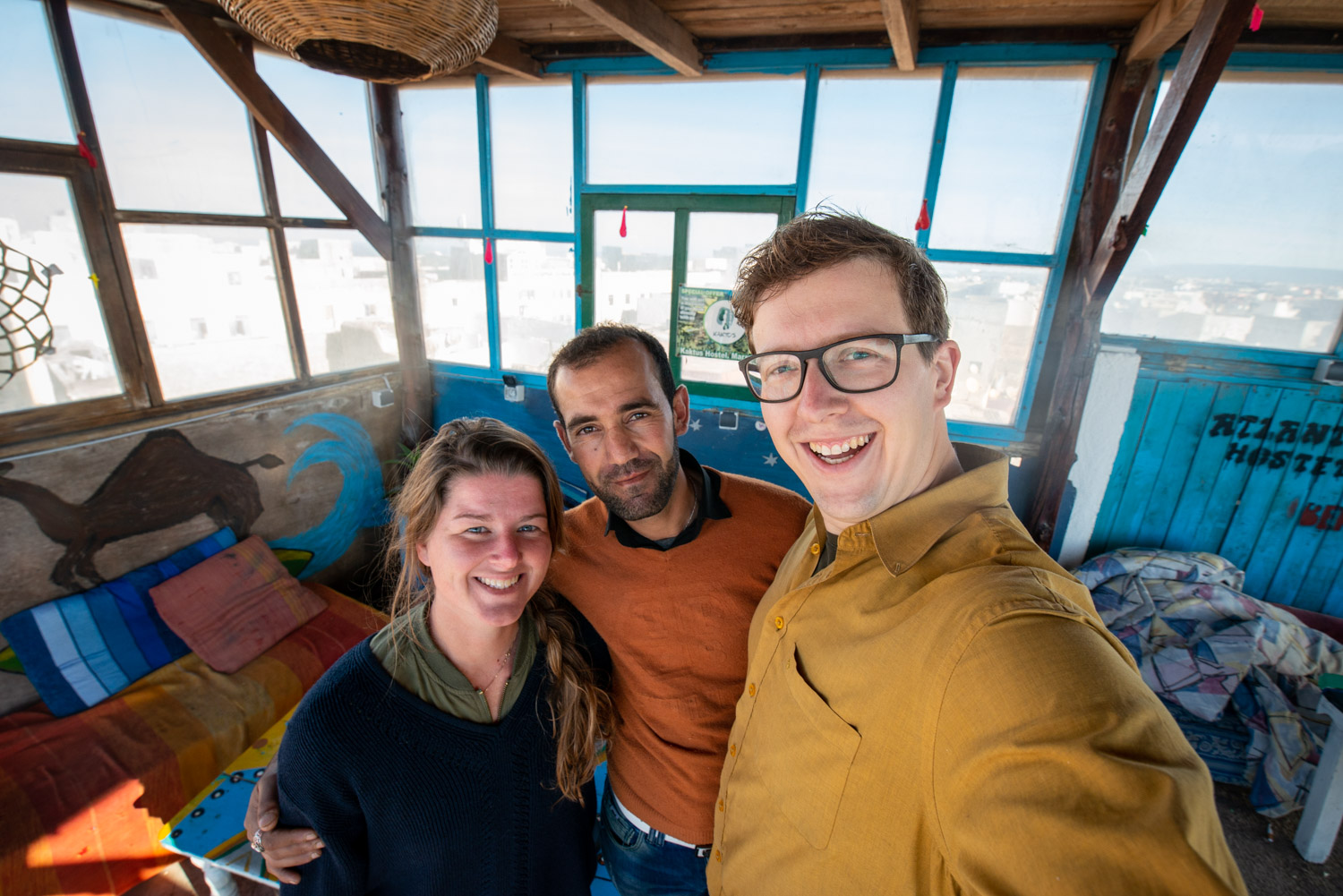 I’ve been to Morocco before and didn’t much like it then. Sure, Moroccan nature is astonishing and the architecture and decoration stunning, but I found all the people I met maddening. Every one of them wanted to sell me something. ‘The hustle was real,’ as they say. It was very different this time around.

We had come to Morocco to meet up with friends and had some time for ourselves before they arrived. As we arrived in Marrakech, I saw the hustle was still alive. Alleys full of knock-off football jerseys and sports shoes, ‘real Moroccan spices, my friend,’ a thousand restaurants all promising the best tajines this side of the Atlas, and argan oil, so much argan oil. That latter a magical potion which heals everything from split ends to aching muscles, aside from helping you get rid of that bulging wallet; or, in my case, the pouch hidden safely in the inside of my slacks. We needed to get away from it and see if the Moroccan people you read about – kind and hospitable – were still existent.

We arrive at the Atlantic Hostel around four, after strolling from the Essaouira bus station to the old center of town. Our backpacks ache on our shoulders, but we don’t mind. We were only in the madhouse that is Marrakech for two days, but the change of pace in this charming town on the shores of the Atlantic Ocean brightens our mood. In the tiny reception area, we are greeted by a guy in an Arab dress, who asks our names. He checks a big ledger for our reservations, and we admire our home for the coming days. They managed to make this place at the same time distinctly Moroccan as well as similar to every other hostel we’ve been to.

We pirouette to take it all in and move about in the way only a backpacker in a small space can; trying not to bump into anything and failing. The walls are adorned with a variety of local items, like brightly colored rugs, but also stained by that crucial hostel wallpaper: the sign. These are everywhere, in all shapes and sizes. Signs telling you what and what not to do, how late to arrive and when to leave, where you can go and what is forbidden. Signs, in short, on how to live your life.

As our names are found in the ledger, a man comes in. Seemingly indifferent to the mass of people already squeezed into the room he works his way through sees people he doesn’t recognize – us – and extends a hand, forcing himself over another backpack, while looking me straight in the eyes. As I feel he’s checking to see my soul, he says: “Hello! I am Couscous.” The name rings a bell.

He asks for my name, fails to repeat it correctly twice and budges over to check on the names – and I assume souls – of the other newcomers. I stand to wonder where I heard that name before. In a moment I realize it was in all the reviews I read online. When scrolling through raving comments about ‘Couscous at the Atlantic Hostel,’ I assumed it was about the food. However, it seems that at least 90% of remarks were not about dinner, but about this man. It doesn’t take long to find out why.

After we check in, we join Couscous in the common room which borders his domain: the kitchen. He sits us down around a table and promises us some Moroccan tea (read: sugar water), while he simultaneously gets started on dinner. The kitchen is tiny, but Couscous tells grand stories about evenings where he put together dinner here for huge gatherings. Though, as he bounces from the kitchen to common room, I figure it is actually the two Moroccan woman in the kitchen who do most of the legwork in these epic tales.

Another story he tells is about a bar which he invites us to: “Tonight we will go, but now it’s just us. Don’t invite other people; otherwise, it will be just like New Year’s Eve. We went with 60 people to the bar, and the police followed us all the way there. While we were inside four police cars patrolled. It was very stressful. I was responsible, you see.”

Suddenly he hears a sizzle or a splash he didn’t expect, and he jumps into the kitchen to check on the food. He reappears at the table just as swiftly and continues: “The police came inside later. It was to tense, and that was the first night I drank whiskey. It made me crazy. So in the end, I escaped and went to the beach to swim.”

The coming days we find out if Couscous’s culinary skills are as good as we’ve read and for five nights in a row he does not disappoint. Every night there is a tajine of some sort (this is Morocco, after all) but we get surprised by entrees like tasty guacamole with bruschetta one night, and a perfectly spiced pumpkin soup another. What makes it all even sweeter is that we are the last to enjoy the work of Couscous’s hands because he is leaving.

“I’m moving to Spain to decorate a hotel,” he tells us. There’s a number of things we expect him to say (‘open my own hostel,’ for instance), yet this is not one. So all of a sudden we are not simply enjoying Couscous and his cooking, but we’re savoring the last days of a legend.

A living legend. That’s what Couscous feels like to this place. Not only does he cook here every night, manage the place, and has he created spots like the first-rate rooftop terrace over his seven years here; he also creates the atmosphere. Don’t get me wrong, the rest of the staff are great; however, it is Couscous who turns this hostel into a home and our one-night stay into five. With our schedule and quick-paced traveling that’s quite an accomplishment.

To say Couscous does this by being at most entertaining and energetic would be an oversimplification. Sure, Couscous’s catchphrase is the phrase: “Hi, it’s me [long pause] Couscous!” and when you spend a few days at Atlantic Hostel you’ll hear him repeating he has put hashish in the dessert over and over, yet Couscous is a man with a vision.

“When people come here they have left work, and stress, at home and they come to Morocco to experience something different; I want to give them that. That’s why I say: give dinner for free! Then the people will come. If I had my own hostel, I would do that. It’s not about the money, it’s about the people. I want to give the people a smiling feeling, bring happiness.” And that’s precisely what he does.

We had the chance to observe him for five days, and he always manages to make people smile and make them feel at home. He gives them everything he has and asks nothing in return. He bounces from the kitchen to the rooftop terrace, to the bar to bring people that ‘smiling feeling’ he talks about, and it works.

Not only do you read his name in nearly every review, hear people in the hostel talk about him regularly, but you also see the legacy he’s going to leave behind before you see the hostel. As we walk back every day from sauntering through town and turn into the alley where the Atlantic Hostel is located it’s not the hostel sign we see. Graffiti’d in big, bold letters across the gate you read: ‘Chef Couscous.’ It looks like it’s telling everyone who comes by this place that this is where Couscous reigns supreme.

In that sense, his departure is like taking someone’s soul. There might still be a body there – the Atlantic Hostel might not go anywhere – but there’s no life left.

The living legend is leaving, and I wonder if there are enough people in Essaouira to fill the hole he leaves behind. 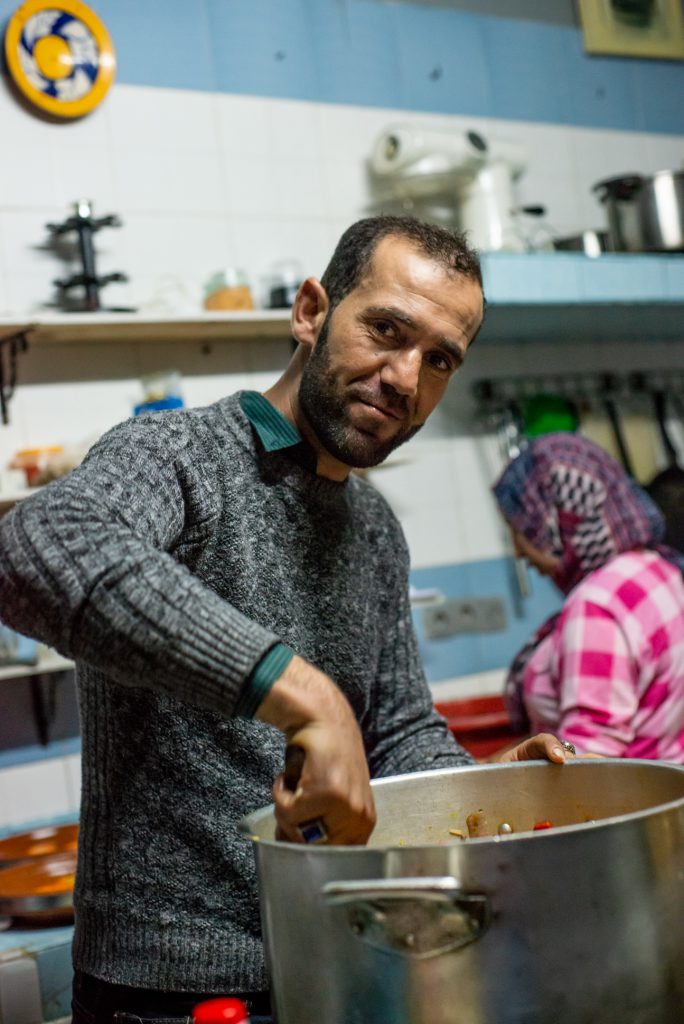