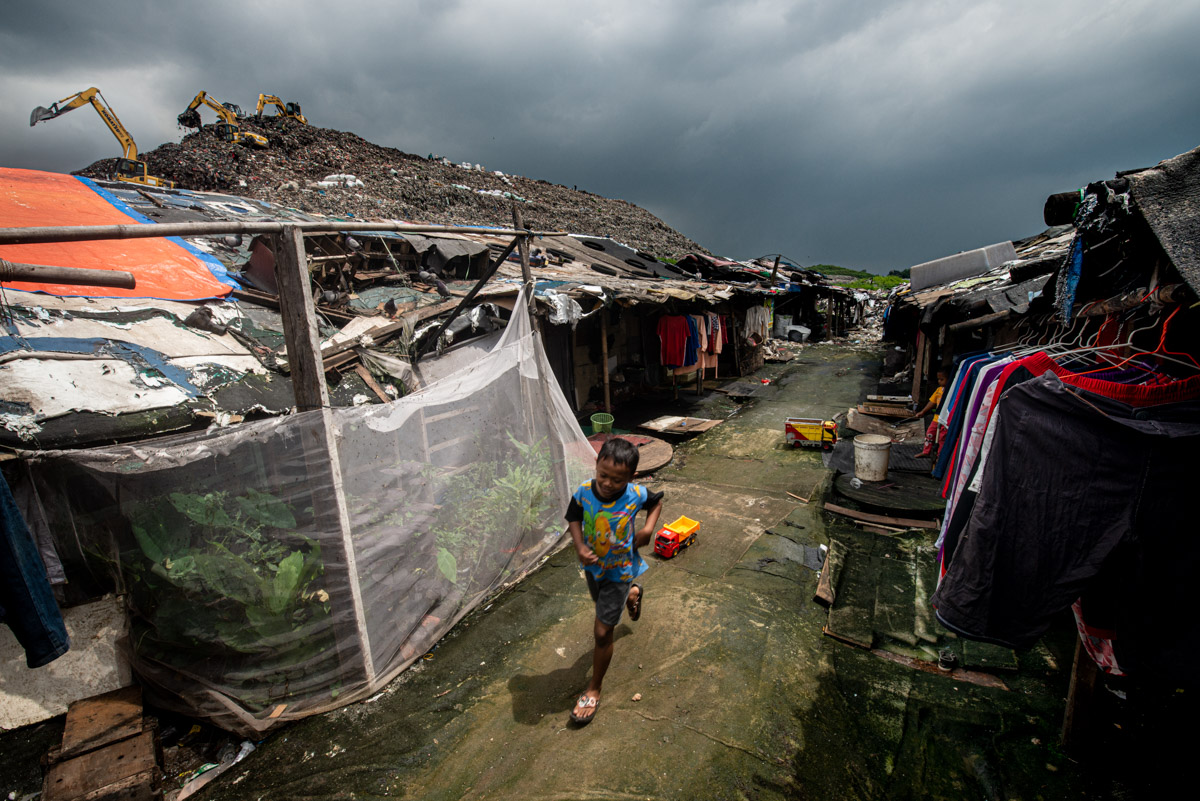 There are flies. Flies everywhere. Thousands of them, I’m not exaggerating, not today. A literal fuckton of flies are swarming all around us. It’s not us they’re after, but all the trash, mountains of the stuff. Actual mountains. There’s so much trash; cans, carpets, chairs, couches, clothing, clocks, computers, stuff that starts with a different letter, also — it’s all there. All of it hard to make out. Because of the flies, you see.

As I stand there, looking out over the biggest landfill in Southeast Asia, I think of my sister-in-law, the younger one. She hates flies, loathes the little bastards with such a passion that it scares me. We are walking around her nightmare and I tell Ellis, ‘this is your sister’s nightmare.’ Ellis agrees.

To be clear, we decided to come here. We didn’t get lost, or tricked, or kidnapped by trash gangsters. This is where we wanted to be — the largest landfill in one of the biggest countries on earth: Bantar Gebang, in Bekasi, Indonesia. Though Bantar Gebang is not in Jakarta, it gets most of its trash from that city of 10 million waste producers, or people. Old, young, of every color and from many nations — they create 6.000 tonnes of trash a day. It arrives in a caravan of garbage trucks that snake through these mountains of trash to dump their filth; my filth.

We are here because there’s something special amidst all of this trash: a kingdom. A tiny island nation hidden among these seas of waste. It has a queen and everything. Its name? BGBJ—or ‘the Seeds of Bantar Gebang’.

After this little intro, you might have a couple of questions zooming around your head.

And maybe, the most important question:

Chapter 1 — Who is the queen of BGBJ?

Kids can be mean. Even for something as small as listening to a song that’s ‘so yesterday,’ eight graders might just eat you alive. Imagine what happens if you live in a landfill; when your parents work with trash; when your house is recycled waste; when all your clothes smell of garbage. You’ll be the entrée, main course and dessert.

Growing up in the middle of all that trash could just as well have made Resa feel like trash, but that’s not who Resa is. No, Resa is a queen. She is the queen of BGBJ today and has been royalty throughout her life.

Because when the kids at her school started taunting Resa, saying she was the princess of Bantar Gebang she took that title and ran with it. ‘Yes, I am the princess of the dump!’ she would tell those who mocked her. She would wave a royal wave, laugh any insults off and take everything in stride.

And years later, when she got the chance to study and be anything else than a landfill princess, she decided she wanted to become a queen. Because Resa herself had the chance to grow, learn, and leave the landfill at Bantar Gebang showed her she could help other kids do the same.

That’s when she started BGBJ.

Chapter 2 — What in the world is BGBJ?

Before there was a landfill, there was already a village at Bantar Gebang. The village is still there, but now it’s surrounded by mountains of trash which are growing at an alarming rate. Around 6.000 families still live there and try to earn a living from the waste.

Most of these are trash pickers.

Now, no job at a landfill is desirable, but trash picking is the worst of all vocations at Bantar Gebang. Day and night trash pickers struggle across the mountains of trash, dodging mechanical beasts, pushing the trash ever upward, breathing in the toxic air to find scraps of material they can sell.

As you will understand a community such as this faces a host of challenges; poor quality housing, a lack of sanitation, work-related injuries and illness, and an unpleasant living environment. On top of that, most families have to keep their children out of school so they can help earn a living wage. This creates a cycle of poverty that is hard to break.

Resa lived through all this and saw how that cycle of poverty kept friends and family from prospering and moving away from the landfill. She decided she wanted to help break this cycle. Resa believed educating the kids at Bantar Gebang would help them move away from the place.

And that is what BGBJ does; it’s a community center that helps to ease the current problems of the families living in Bantar Gebang and a hub that assists young people to break free from the cycle of poverty they are in.

‘There are only two certainties in life: death and taxes.’

And trash. Yeah, let’s make it three certainties because man, do we create a lot of trash. All this trash has to go somewhere. Whichever place you put it, will become too small because there is always more trash.

That’s what’s happening at Bantar Gebang—the trash is outgrowing the area and more areas need to be converted into landfill. One of those areas the government wants to convert into a trash yard is the village of BGBJ.

All the houses, all the people, the Kingdom of BGBJ and Queen Resa have to go.

That’s sad, immensely sad. After 17 years of BGBJ, Resa will have to leave behind the kingdom she has built. However, as long as we don’t stop creating trash, new landfills will have to be created.

And so the government of Indonesia is going to buy up BGBJ and the kingdom will cease to be. But Queen Resa isn’t done yet, there is still work to do—a cycle of poverty to break. Whatever happens, Resa wants to start again and from the ashes of BGBJ a new kingdom will rise, but…

Resa fears the government will try to buy her land for two cents on the dollar — it’s land in the middle of the landfill, they will say. It is worthless. Though it isn’t worthless. We know that now. BGBJ is, if anything, priceless. You can’t describe what Resa has created over these last 17 years in any metric, graph or—shudder and shake—a number on a cheque.

Yet, what can she do against the might of the Indonesian government?

Something. That’s what, Resa Boenard does not sit idly by as faceless civil servants destroy what has cost her so much to build, with the flick of a wrist.

That’s where we come in.

We met Resa in Bali, as one does. I mean, who hasn’t met a queen in Bali?

We were visiting one of our favorite hotspots, a creative studio called Lalaland, where they screened a documentary called Sampah. ‘Sampah’ is Indonesian for trash. Yeah, you’ve got it. It was a documentary about BGBJ and about Resa, who was there.

Seeing this documentary gave Ellis the inspiration to do a project at BGBJ she’s had on her heart for years.

With this project Ellis wants to find out what children want to be when they grow up and photograph them dressed up as if they were already a chef, pilot, firefighter, or police officer. Ellis wants these pictures to make these kids’s dreams a little more real and help them work towards the future they see for themselves.

So Ellis got in touch with Resa and pitched the projected. Resa loved it, Resa loves everything that’ll help to empower her kids. However, with corona raging and Jakarta amid some pretty heavy flooding, it wasn’t the time.

A week later, Resa called Ellis back. She needed a photographer.

Sub-chapter 3.2 — What did we actually do at BGBJ?

After receiving the news that the government was to buy her land, Resa knew she had to get moving if she wanted to control the process. Knowing the Indonesian government, she felt she needed leverage to pressure the government into giving her a fair price.

Luckily, throughout the years, Resa has built a vast network of both local and international supporters for her cause. She’s been named one of Indonesia’s most inspiring women, has traveled the globe speaking about her project, and many people travel to BGBJ to sleep at the BGBJ hostel and work as volunteers.

To get the attention of these people for what BGBJ has been doing for the community of Bantar Gebang for 17 years, she wanted to create a beautiful photobook which could she can sell to create awareness for BGBJ’s current situation.

So, that’s what we did at BGBJ. We spent 10 days at the Kingdom of BGBJ and Ellis photographed everything from the ‘castle’ to the families BGBJ helps.

Be honest, you want to know what it smelled like, right? That’s all you’ve been thinking about; did it smell like, really bad? Like, really, really, bad?

On the first night we came to BGBJ, it wasn’t the smell that took us by surprise. Visiting a landfill, the smell isn’t pleasant, but the people? That’s what’s interesting.

Not only Resa welcomed us into the house, but also five smiling faces belonging to five very shy teenagers. Although they have an English class at BGBJ, actually talking English was quite a challenge. What do you say to two strangers?

But we had a lovely first night. And a lovely second night. And the entire week at BGBJ was just wonderful. They treated us with love and care, sharing in wonderful conversations, amazing food and loads of laughter.

Ellis got to meet with many families and took pictures of the many aspects of life at Bantar Gebang — from the community center to the families’ living conditions.

So what does it matter that it doesn’t smell amazing, if the people are?

So, BGBJ is short for ‘the Seeds of Bantar Gebang’ in Indonesian, but who are these ‘seeds’?

The kids, of course. The kids who come to Bantar Gebang to learn and play and be seen and loved. They are the seeds that Resa wants to plant with BGBJ, to nurture them until they grow and grow, much like the beanstalk in the famous fairy tale — to the clouds and beyond, ever higher.

Because these kids might be born amongst the trash, but they are far more than that. Though they have fewer chances, they don’t have smaller dreams, or lesser expectations of what life can give them.

The only thing is…they might need a little more help. And we’re so thankful we got the chance to help them a little.